Unstructured ideas, requests and suggestions for the development of the game.
Post Reply
20 posts

oh, i did not use it for quite some time, as far as i remember back then it was fixed on one spot, maybe i am remembering it wrongly 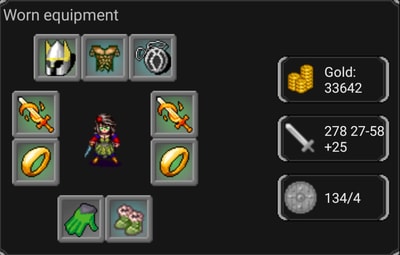 I've pushed up my code for dpad-only movement here.

I haven't (yet) made this change configurable via Preferences. It's definitely possible, but I wanted to ask beforehand: Is it worth another separate option, or is the use case covered well enough by minimizable dpad + touch-based movement when minimized? In my testing, this felt natural enough to me, but I'm not sure how strongly others may feel about it.

Any thoughts on this?
Top

I think it is great the way you have it.

I've never used the d-pad because of this defect. So it's exciting to see this finally fixed after at least 5 years.
"A home without a beagle is just a house"
Top

I've been playing using this lately. There are 2 things that still sort of bother me about it, so I'm looking for a sanity check here before I run off to implement anything.

First, I've attached a screenshot with the Android debug option "draw layout bounds" enabled, so there's a bounding box drawn around the dpad's UI element. The logic of the dpad divides this bounding box into thirds vertically and horizontally (like a tic-tac-toe board) - if you tap in the upper left section, you move to the upper left, etc. But since the bounding box is drawn so loosely around the dpad, the tappable area for diagonal movement is mostly outside the visible part. I feel like a more squarish graphic that better fills the bounding box might make the diagonals feel more natural. Does that sound reasonable?

Second, dpad taps are handled differently from normal taps during combat. If you hold your finger down without the dpad, you won't make an attack until you lift your finger. If you hold your finger on the dpad, though, each tiny movement of your finger is interpreted as a new tap. If you combine that with the "Instant (no animations)" combat speed option, that means you can accidentally spam attacks immediately upon starting combat. As amusing as it can be to blast your way through lines of enemies quite literally without lifting a finger, the stakes of doing that can be pretty high - especially if you're playing a permadeath/limited lives file. In my head, it'd be ideal if the in-combat behavior of the dpad were closer to the non-dpad behavior, requiring discrete taps to attack. Would we want this?
You do not have the required permissions to view the files attached to this post.
Top

Didn't your code fix address the first issue?
"A home without a beagle is just a house"
Top

The previous fix addresses the problem of tapping too far out, outside of the dpad's bounding box - what I mean here is sort of the reverse, where the visible graphic of the dpad's diagonals are small enough that I find myself accidentally tapping too close to center.

I've attached another graphic which (roughly) visually shows the 9 logical regions of the dpad, as the code interprets them:
ui_dpad.png
They function as you'd expect - touching the top left moves the character to the northwest, etc. But most of the tappable diagonals are part of the invisible/transparent parts of the dpad, which I think tends to make me tap too close to the cardinal directions, so e.g. I try to go northwest but accidentally hit north or west instead.

So the alternative I'm mulling over is replacing the circle shape of the dpad with something either squarish or at least more convex, to better emphasize the diagonals.

Does that make sense?
You do not have the required permissions to view the files attached to this post.
Top

Yes, I understand. I don't think we are married to that d-pad image. If we can get a bigger one or more convex one or squarish one that we have legal license to use then I'm all for replacing it
"A home without a beagle is just a house"
Top

How about make the d-pad more transparent because sometimes it blocks what i need to see behind it.

Another thing is to the ability to move the d-pad in game, instead of going to main screen and preference and back to game, so that I can see what the d-pad was blocking. If I can move it quickly in-game, I won't waste to much time trying to find the option to move it in preference.
Top

You are able to mini it if you press in the center
You do not have the required permissions to view the files attached to this post.
~ I guess it's time for a new char~

Used no substance to heal
Dont click unless you want a spoiler on the game
https://drive.google.com/folderview?id= ... l912tzEcSk
Top

Yes, I am well aware of this feature. However, I don't use it because often times I accidentally minimize the d-pad and then go to the wrong direction, which of course could be a problem in crucial situation.
Top
Post Reply
20 posts